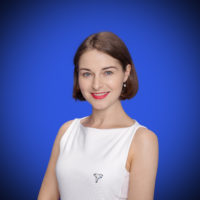 Kateryna Kruk is a Public Policy Manager for Ukraine at Facebook. She is also a communications specialist and political scientist focusing on Ukrainian post-Maidan transition, international affairs and analyzing Russian misinformation campaigns in Ukraine. She formerly worked with Prague based European Values think-tank and Stop Fake. For over a year she was an author and a TV host at the StopFake Digest.

Kruk took an active part in the Euromaidan protests in 2013-2014, also known as a Revolution of Dignity. For her active role in communicating the revolution to the international audience, Kruk was awarded the Atlantic Council’s Freedom Award in 2014. As a communications expert, she worked in Ukrainian government (2014, 2017) and Ukrainian parliament (2016). Alumna of Wroclaw University (2013) and College of Europe (2015).  Bilingual in Ukrainian and Polish. Fluent in English, Russian, French, and German.