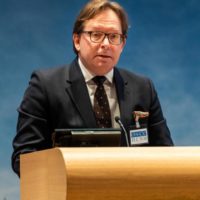 Ambassador Henrik Villadsen from Denmark was appointed Project Co-ordinator in November 2018. Most recently, he was Director of the office of the High Commissioner on National Minorities since December 2014.

He holds a master’s degree in law with a specialization in human rights under armed conflicts and is a qualified barrister with the Danish Ministry of Justice since 1997. As a commissioned officer in the Danish Armed Forces, Ambassador Villadsen served with the EU Monitoring Mission to the former Yugoslavia in 1993–1994 and later with various intergovernmental organizations, such as the OSCE, the UN and the EU in the former Yugoslavia.

In Kosovo, Ambassador Villadsen held management positions in the EU and the Kosovo Trust Agency. He also served as Special Assistant to the Special Representative of the United Nations Secretary-General for Kosovo.