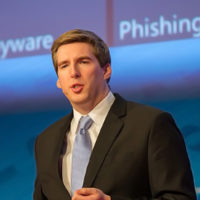 Jan Neutze leads the Microsoft Cybersecurity & Democracy Team at Microsoft Corp in Redmond, WA which brings together a group of policy, legal and technical experts focused on defending democratic processes and institutions against cyber-enabled interference. In addition, Jan leads Microsoft’s cybersecurity norms efforts focused on protecting societies from cyber conflict working with governments and non-government stakeholders around the world. From 2013 to 2017, Jan built up and managed Microsoft’s cybersecurity program in Europe, Middle East, and Africa (EMEA). In that role Jan lead a team of policy and technical experts based in Brussels, Belgium with a focus on cybersecurity policy and regulatory issues as well as a range of strategic projects aimed at managing geopolitical risk. Jan has served in a range of advisory roles on cybersecurity policy issues, including the Permanent Stakeholder Group of the European Network and Information Security Agency (ENISA) from 2015-2017, advising the EU agency’s leadership; as well as the Management Board of the Global Commission on Cyber Stability (GCSC). From 2011-2013, Jan worked in Microsoft’s Trustworthy Computing (TwC) group at Microsoft headquarters focusing on cybersecurity public policy, risk management and critical infrastructure protection. Jan joined Microsoft from the United Nations Headquarters where he served for three years in the UN Secretary-General’s Executive Office and in the Department of Political Affairs, leading a range of cybercrime and counterterrorism projects. Prior to his work at the UN, Jan managed transatlantic policy projects at the German Marshall Fund of the United States and the Atlantic Council of the United States. Jan is a Certified Information Systems Security Professional (CISSP) and a Certified Information Privacy Professional (CIPP) and holds a J.D. from the University of Muenster, Germany as well as an M.A. from the School of Foreign Service at Georgetown University in Washington, DC.