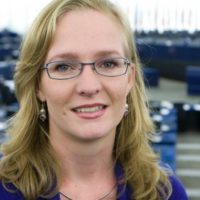 Marietje Schaake is a Dutch politician who served as Member of the European Parliament from the Netherlands between 2009 and 2019. She is Coordinator on the International Trade committee, where she is the ALDE spokesperson on transatlantic trade and digital trade. Schaake also serves on the committee on Foreign Affairs and the subcommittee on Human Rights.

Furthermore, Schaake is the founder of the European Parliament Intergroup on the Digital Agenda for Europe. In 2017 she was Chief of the European Union Election Observation Mission in Kenya. Since 2014, Schaake is a ‘Young Global Leader’ with the World Economic Forum and she was recently appointed as co-chair of the WEF Global Future Council on Agile Governance. Schaake is a Member of the Transatlantic Commission on Election Integrity, the Global Commission on the Stability of Cyberspace and chair of the CEPS Taskforce on Software Vulnerability Disclosure in Europe. Furthermore, she is a member of the European Council on Foreign Relations and an advisor to the Center for Humane Technology. Schaake was featured by Politico as one of the 28 most influential Europeans in the ‘class of 2017’