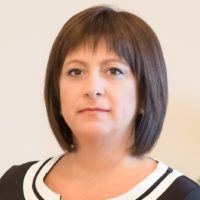 Natalie A. Jaresko has enjoyed a distinguished international career in public service and private industry. As Ukraine’s Finance Minister (2014-16) she served at a particularly critical moment when the post-revolutionary state was rocked by deep recession and war on part of its territory. During her tenure she led the successful negotiation of the largest IMF program in the institution’s history, as well as a complex debt restructuring. Her government’s success in restoring macroeconomic stability enabled the creation of a broad international financial coalition to support Ukraine’s transition. She led the reduction of public spending, cutting the deficit by more than 75% to 2.1% of GDP in 2015. She also advanced tax reform resulting in an almost 50% reduction in payroll tax, eliminated tax privileges which favored vested interests, implemented a transparent e-data system placing all treasury transactions online in real time, as well as initiated corporate governance reform in state-owned banks.

Previously, she spent two decades working as Horizon Capital co-founder and CEO, a fund with over $600 million under management and as Western NIS Enterprise Fund President and CEO, creating a platform for private equity investment in the region. She began her career in public service in the United States, serving in the State Department from 1989-92, then as Economic Section Chief of the U.S. Embassy in Ukraine from 1992-95. Currently, she serves as a Member of the Transatlantic Commission on Election Integrity; Chair of the Board of Trustees of Aspen Institute Kyiv; Nonresident Distinguished Senior Fellow at the Atlantic Council; Member of the World Economic Forum Global Future Council on Financial and Monetary Systems; Board Member of the Leavitt Institute for International Development; Advisory Board member at the Lviv Business School at Ukrainian Catholic University; and Patron of the Ukrainian Institute London.