Director of Public Relations and Communications is System Capital Management (SCM) Natalya Yemchenko: “We are ready to play on European rules and to support reforms which are needed to be done in Ukraine to be strong and valuable partner for Europe” 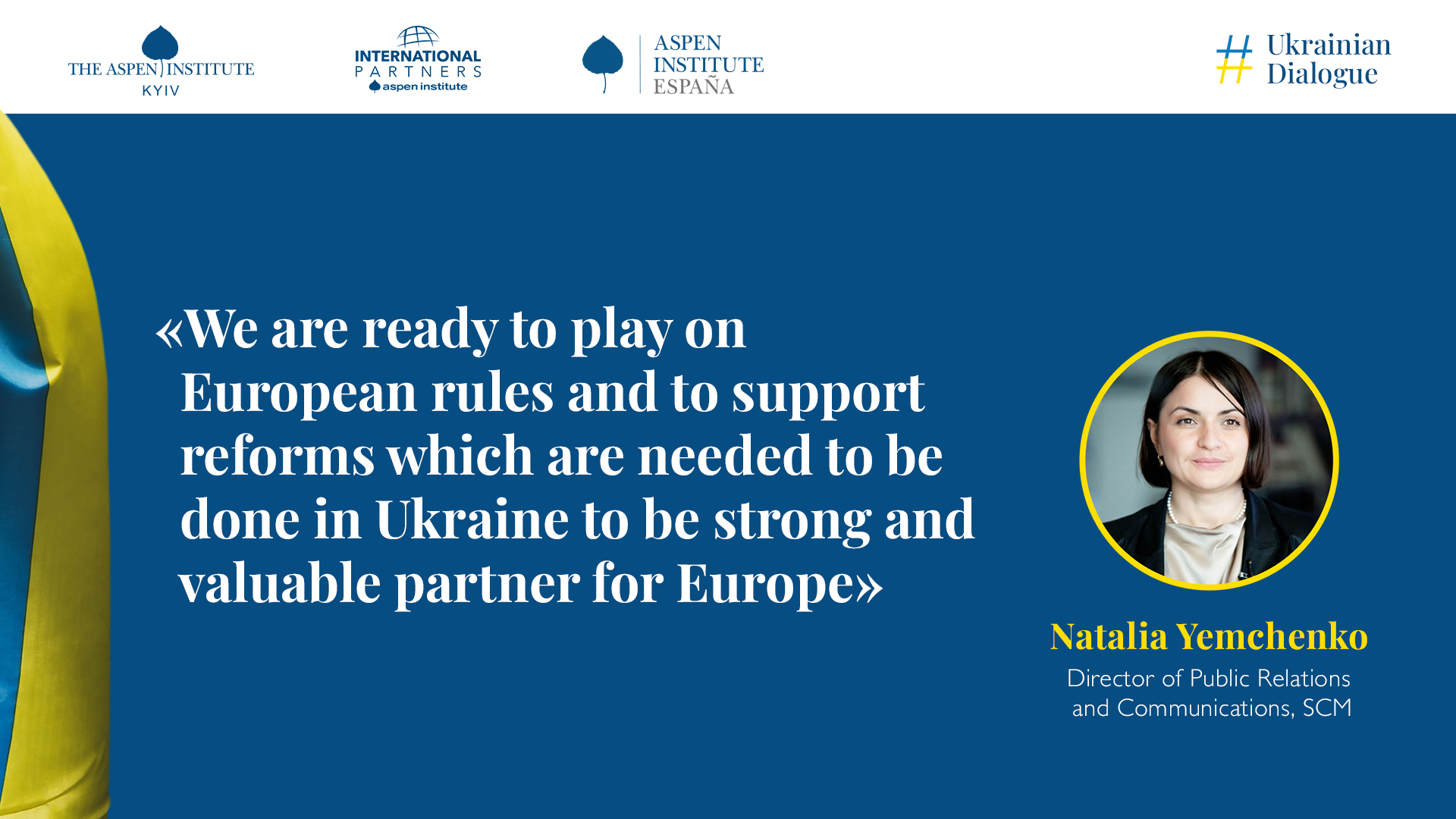 Aspen Institute Kyiv started the series of panel discussions with Aspen Network international partners — #UkrainianDialogue. Their goal is to share the personal stories of Ukrainians who help to defend freedom of our country and to have a two-way communication with other countries that support us. Natalya Yemchenko was the speaker of the first discussion, which was held with Aspen Institute Spain. Natalya talked about Russia’s aims at this war, importance of the economical front and readiness of big Ukrainian business to play European rules.

“Russians just do everything to liquidate Ukraine and Ukrainians”

Natalya Yemchenko is a Director of Public Relations and Communications in SCM. Originally she is from Donetsk. Natalya was born there, grew up, and married. Her 3 children were born in Donetsk. All her life was connected with that city. 8 years ago Natalya lost her home. That’s why she is sure that this war started not on the 24th of February 2022 but 8 years ago. Natalya thinks that there is no space for compromise in war with Russia:

Another aim of Russia is to destroy the Ukrainian economy. Natalya explains why Russians are focused on this:

— Russia doesn’t want to receive control under the territories and enterprises which will not be in line with its ideology and Ukraine will not be.

Natalya is sure that the economical front is also a first front. The Ukrainian economy is developing and SCM has been investing huge money year after year even after losing 30% of business in 2014. There were company’s assets in occupied Crimea, and occupied parts of Donetsk and Luhansk regions.

Now the company, which Natalya represents, does everything to support Ukraine in all possible ways. They are active in humanitarian aid and in supporting the army. SCM delivers more than a million dollars each day for these needs.

Also the company has a lot of work to do to provide necessary services to its сonsumers . In particular in regions where hostilities are taking place.

— First thing Russians usually do when they enter the territory — they destroy electricity grids and telephone connections. Both businesses are inside our group, so we are in the front line to give back this staff to people.

Natalya says that it’s not possible to operate businesses like usual, but they try to do it at the highest level possible. Nevertheless there are some particular points and cities which are under huge damage and operating there is impossible. Biggest point of tragedy is Mariupol. It’s an industrial city, where substantial SCM’s assets are located.

— It’s totally blockaded and it’s a humanitarian catastrophe. I don’t have particular numbers but I would like to say for sure that the numbers of deaths in Bucha and pictures you saw over there should be multiplied by 20 to understand what’s going on in Mariupol.

“We are ready to play on European rules”

Natalya emphasizes that Ukrainians are very strong in their understanding that Europe is their home and Europeans are their partners. Despite the fact that Russian propaganda is trying to prove otherwise. The same position has the company, which she represents:

— It’s a two way road and definitely we need not only words but support from Europeans. Especially in the EU integration process. We are the biggest Ukrainian business and we are all together with our government as for the European vector. We are ready to play on European rules and we are ready to support reforms which are needed to be done in Ukraine to be a strong and valuable partner for Europe and part of European society.