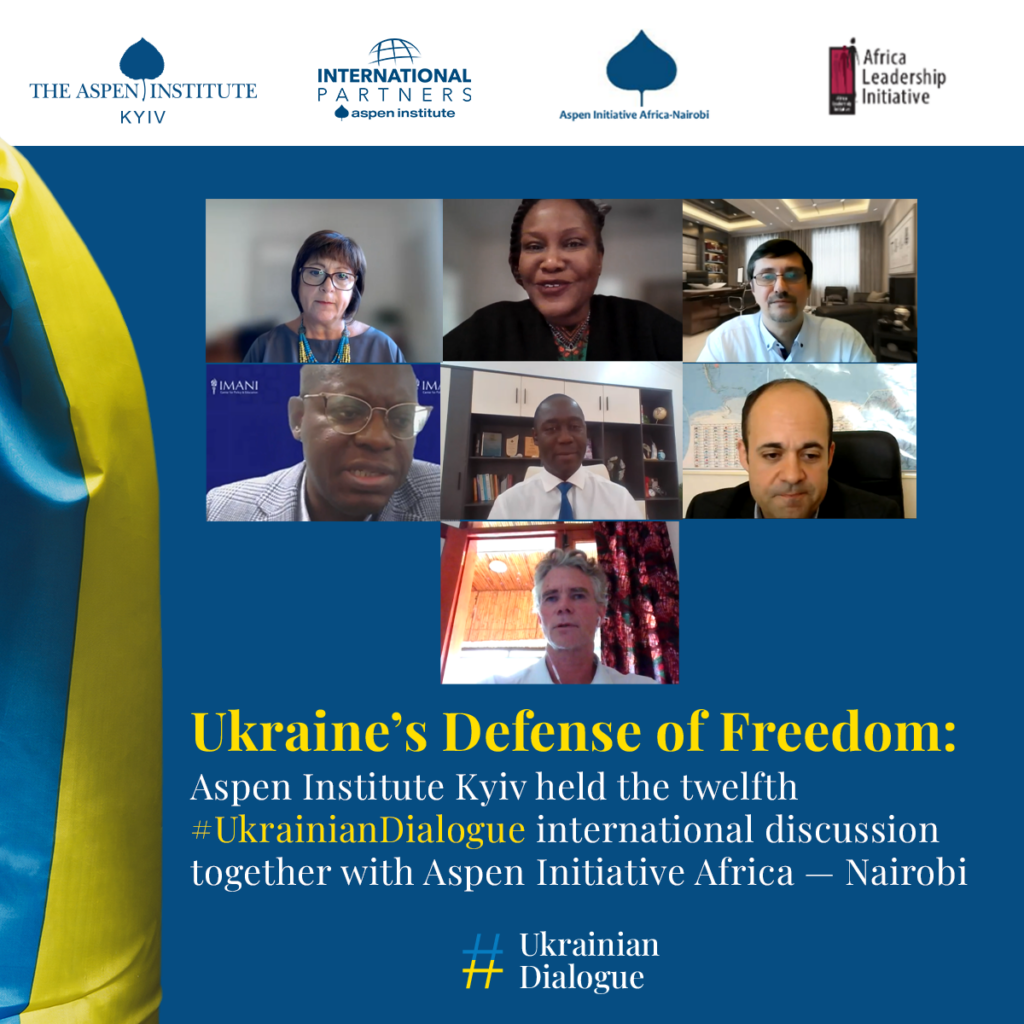 John Ulanga: “Many people of the global population are impacted by the Russia-Ukraine war”

John Ulanga is Regional Director for East and Central Africa, Trademark East Africa, Fellow of the Africa Leadership Initiative, East Africa. John underlined that just like many African civil society leaders he has not had an opportunity to engage in conversation about war in Ukraine. He is sure that there is a need for more discussion about it, and especially — intercontinental.

— We see unnecessary, unjustified, terrible conflict. Mechanisms that have been put in place by the international community have not been able to resolve the conflict at the expense of innocent lives of Ukrainian men, women and children. But also at the expense of many people of the global population who are impacted by the conflict. You can see over the last 6 months there is over 50% growth in fuel prices in Africa. In some cases over the 100% prices increase on some key supplies such as paper. Also there is a huge diversion of aid that was allocated in the African continent and now is actually addressed to resolve the humanitarian crisis caused by the Russian-Ukraine war.

Bruce Robertson: “When the price of imported oil seeds and oil has grown up, people began sourcing much more seed locally”

Bruce Robertson is a founder and CEO of Gulu Agricultural Development Company and Fellow of the Africa Leadership Initiative, South Africa. He highlighted that the Russian blockade of Ukrainian ports and its impact on imported oil and seeds prices resulted in the rising interest of African consumers in local products.

— There are various levels of urbanization in Africa. For example, Uganda has 85% of people living in rural areas and subsіstence farming. In Zambia, it’s probably about 40%.And the rest is somewhere in between. The majority of people living over the rural area do subsistence farming. The products that they produce are soya, sunflower, sesame, cotton seeds or oil seeds. When the price of imported oil seeds and oil has grown up, people began sourcing much more seed locally, and farmers have seen their income. This time last year farmers were getting 1200 shillings per kg of soja. Now they’re getting 2500. So it more than doubled.

Maxym Subkh: “The pure reason for the food crisis in Africa is the Russian aggression and the blockade of the Ukrainian ports”

Maxym Subkh is Ukraine’s Special Representative for the Middle East and Africa. He stated that the pure reason for the food crisis in Africa is the Russian aggression and the blockade of the Ukrainian ports.

— Food crisis in Africa has nothing to do with the international sanctions imposed on Russia since those sanctions were not applied in Russian food-staff and grain exports as well as fertilizers. Africa was and still could face terrible consequences if the Russian aggression continues. The dependence of numerous African states on the supplies of grain from Ukraine is very essential. That’s why Ukraine tries to prove itself as a reliable partner who can fulfill its obligations and continue supplying vitally important food staff and grains to Africa.

Natalie Jaresko: “Russia tries to enforce its colonialism on Ukraine”

Natalie Jaresko is a Chairperson of Aspen Institute Kyiv Supervisory Board and Minister of Finance of Ukraine (2014 — 2016). Natalie stressed that it’s in the interest of African countries to look at Russia as it is.

— Russia is a colonial power and extending Africa’s recent history to a large degree has been shading the vestiges of colonialism. Russia tries to enforce its colonialism on Ukraine. There are hundreds of years of history: Russian Tsarist Empire, Soviet Union and now the Russian Federation have been trying to do the same. I think it should be a unity with Ukraine to see that this is what is happening.

Natalie added that to allow the colonial power to blackmail the world overnight with food, with energy, with nuclear power is not the same as having a developing policy.

The main objective of the #UkrainianDialogue project is to create a dialogue platform between Ukrainian leaders and international representatives for sharing truthful information about the Russian-Ukrainian war, and discussing how to support Ukraine for the victory.

Aspen Institute Kyiv is grateful to Aspen Initiative Africa — Nairobi  for their support and the opportunity to have a dialogue with their Community.