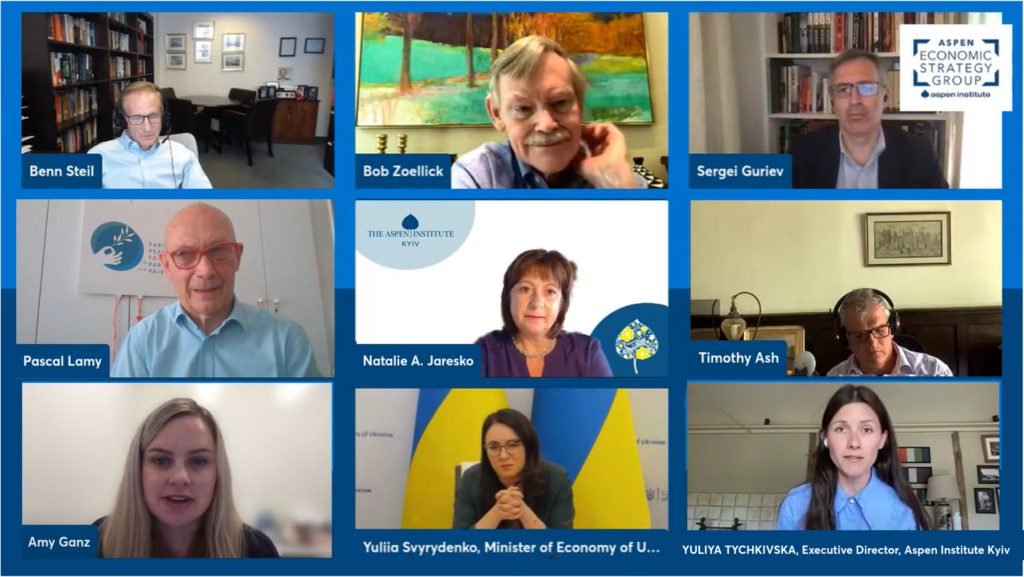 Aspen Institute Kyiv in cooperation with Aspen Economic Strategy Group held the event on Ukraine’s Recovery and Reconstruction. The economic leaders of Ukraine, Europe, and the West discussed the questions of Ukrainian reconstruction financing, the lessons of the past reform efforts, changes in Ukraine and its role in Europe, the broader geopolitical and strategic implications of Russia’s invasion, and future rebuilding of Ukraine. Robert Zoellick, AESG member; former President of the World Bank, moderated the event. The discussion was divided into two thematic panels.

Yuliia Svyrydenko: For further involvement of capital in our country we need not only physical reconstruction but also a rebuilding on a new base

Yuliia Svyrydenko underlined the importance of sustaining the victory, which means Ukrainian prevail on both military and economic fronts. Also, she said that for further involvement of capital in our country, we need not only physical reconstruction but also rebuilding on a new base. In that case, the EU accession would be a great step:

— We need to accomplish needed reforms to achieve the rule of law, the property rights protection, and it is the crucial reason for joining the EU – in this case, we will adopt all the rules and laws to achieve these goals.

Yuliia also stressed that five key industries need to be boosted: energy security, food security, cyber security, green metallurgy, and military and aerospace complex industry. For that Ukraine needs to develop four competitive advantages: to win regional tech competition, to assure investors that they will be able to get cheap electricity, to provide minerals, hydrocarbons, and wood for further processing, and to provide secure and fast logistics in Europe.

Natalie Jaresko: Much of today’s economic resilience in the face of this war is based on the reforms of the last 8 years

Natalie Jaresko stressed that much of today’s economic resilience in the face of this war is based on the reforms of the last 8 years.

— From 1991 to 2014 Ukraine had a mixed history in terms of incomplete reforms. Progress was made, and then the steps were backward. The Revolution of Dignity and then the initial invasion which began in February 2014 with the occupation of Crimea and Donbass, were unturning points. Since that time and over the last 8 years the Ukrainian government started to move forward with the necessary economic reforms. Some of the most critical was redirecting at least 5% of the GDP into national security. We see how it works today, where our militaries successfully stand up to the second largest army in the world. Also, physical decentralization moved the revenues down to the local communities. It created local communities and leaders that today take responsibility and act without directives from above.

Among other crucial economic reforms, Natalie highlighted implementing many institutional mechanisms to improve transparency. Among them Prozorro and Diya. They did a couple of things: improved efficiency but also broke down some of the corruption. And the last one – banking reform, which implemented strong regulation, eliminated weak banks and created a very resilient banking system.

Pascal Lami: Ukraine’s reconstruction and its accession into the EU are totally intertwined processes

Pascal Lami worked closely with Ukrainian authorities between 2005 and 2008 before Ukraine became a member of the World Trade Organization. He highlighted the incredible changes, which happened in Ukraine, since that time and assumed that they could be an explanation for Ukrainian current resilience. He also agreed with Yuliia Svyrydenko that Ukraine’s reconstruction and Ukraine’s EU accession should go hand in hand:

— This moment should kick off a 10-year process for Ukraine’s reconstruction and its accession into the EU, which I see as totally intertwined processes. They should go hand in hand – Ukraine’s reconstruction with massive effort mainly from the EU and US, and this being embedded in its European accession process. Starting with reconstruction, I see a 3-5 hundred billion financing package. Second, restoring distort infrastructures. Third, putting Ukraine into the normal path of development. Also, a 20-40 carbon target, could be a distinctive feature and backbone of such a recovery plan.

Timothy Ash: frozen Central Bank reserves and other frozen Russian assets that probably are around 400 billion can be used for the reconstruction of Ukraine

Timothy Ash proposed to look at the reconstruction of Ukraine in longer terms. In this case, the main issue is gonna be “Who pays?”. He thinks that frozen Central Bank reserves and other frozen Russian assets that probably are around 400 billion can be used.

— It’s a complicated issue, there are legal issues but this is such an extraordinary event, that’s such an extraordinary attack on the Western liberal market democracies. Putin has crossed all kinds of norms and standards. We have to change and make sure this happens. If this money is not used to pay for reconstruction, western taxpayers will have to. Many things that we thought could never happen in terms of sanctions: CBR asset freezes, SWIFT sanctions, kicking Russians out of various investment indices got done. With political will, they can get done.

On the other hand, legal changes that will be required will take some time. Timothy Ash asked what if as an entering measure Western governments pledged to lock those frozen assets to pay Ukrainian debt.

— Ukraine started this war with a 50% GDP ratio and will end it with 100%. How about we keep the stock of publiс at 50%. The other 50% will earmark some of that frozen Russian assets to cover that. Ukraine’s creditworthiness remains pre-war and we will guarantee that we’ll sort it out and eventually those assets would be freed to be used fully.

Timothy Ash also proposed to push the private sector to put new money on the table and partner up with the official sector, viewing this recovery and regeneration program as a wonderful opportunity for private businesses to get involved.

Benn Steil thinks that the Marshall plan analogy is not helpful for Ukraine, it builds up expectations and minimizes the focus that needs to be put on security.

— Keeping Ukraine from joining NATO is a central Russian warning. We should be realistic about any reconstruction aid that we would provide Ukraine. It will not have the sort of transformative, economic, and political effects that Marshall plan aid had without some form, some basic form of cooperation from Russia, or at least committed non-interference. The obvious possible result of this conflict is that Ukraine liberates, and President Putin deposes. Even in that case, we are highly unlikely to have a pro-western Russian government that would support a political and security integration of Ukraine into Western Europe and a wider Western sphere.

Sergei Guriev:  The Russian government is quite openly talking about this crisis as a trap for Europe

Sergei Guriev stressed the problem of the blockade of Ukrainian ports and the initialization of the grain crisis. He said, except for the tragedy of the Ukrainian people, there is a problem for developing countries. That includes the Middle East and North Africa — the main grain importers from Russia and Ukraine.

— The Russian government is talking about this crisis as a trap for Europe. The closest confidant of mister Putin, the Secretary of the Security Council and former KGB chief Nikolay Patrushev, said openly a month ago that the grain crisis would result in grain shortages and higher bread prices in the Southern East and the Mediterranean. Europe would get a huge wave of migrants and refugees. They are quite open about weaponizing this crisis. This is something we should worry about. We should prepare ourselves and help these countries to survive this shock. And, of course, make every possible effort to unblock Ukrainian ports. Turkey is a crucial player in this. Eventually, it is a trap to global stability and European unity.

Pavlo Klimkin: in Russia, there is a purely fascist regime with a clear focus on the past