Aspen Institute Central Europe: the eighth #UkrainianDialogue on how to defeat the last empire 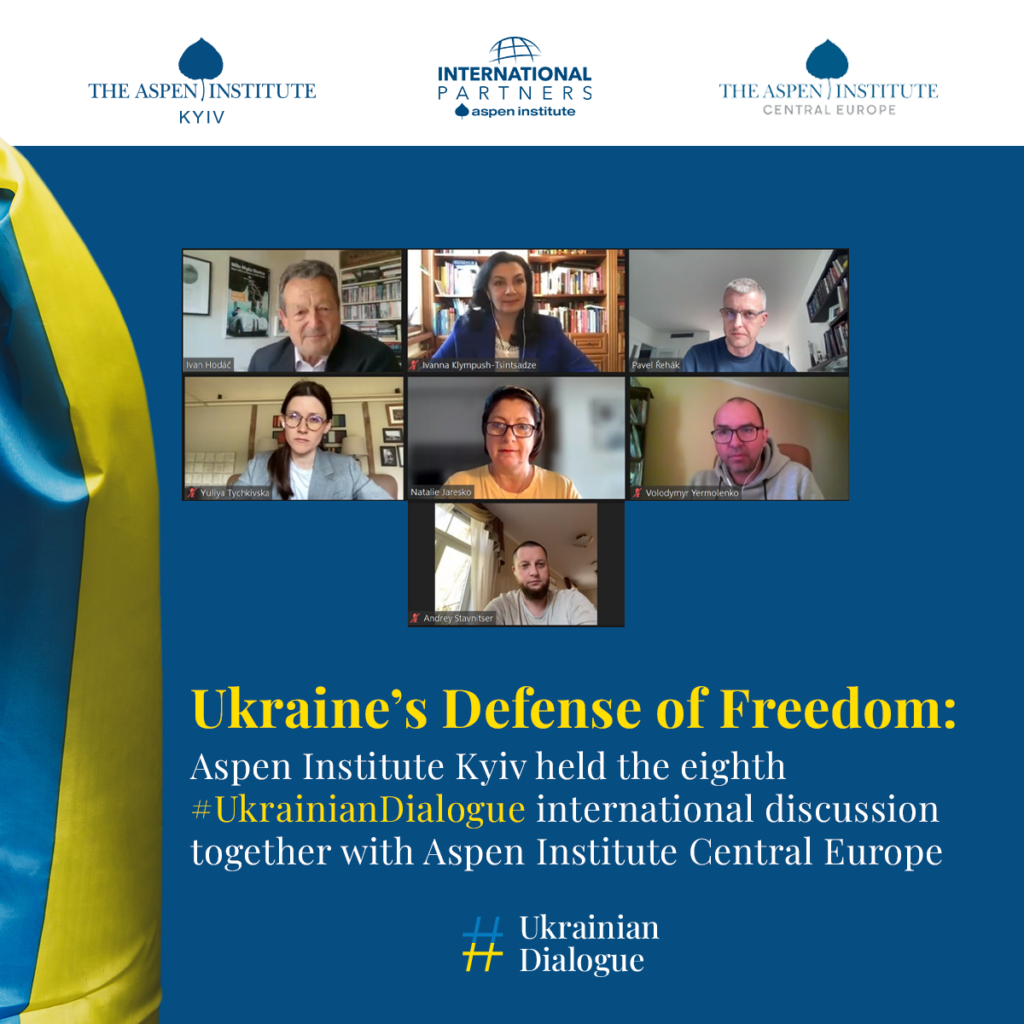 Natalie Jaresko: “We need to keep re-upping our personal involvement”

Natalie Jaresko is a Chairperson of the Aspen Institute Kyiv Supervisory Board and the Minister of Finance of Ukraine from 2014 to 2016. Natalie is convinced, that the Russian war in Ukraine is an existential risk for the democratic world, and now everybody is facing a choice:

— We either win this war and prevail in Ukraine and give Ukraine what it needs to win the war. Or we face a future where autocracy beats democracy, or nuclear proliferation becomes common and  nuclear bullies get to dictate the terms of peace.

Natalie underlined, that in democratic world people themselves have to make choices and to demand from their elected representatives and companies to act how they expect them to act:

—We need to keep re-upping our personal involvement. And from my perspective it comes from multiple pieces. First, we need to continue to urge our elected officials to provide more military support to Ukraine, more financial support, and they have to do it urgently. Second, we need to pay attention to what the business community is doing in Russia. And we should do everything to isolate the Russian economy. And when we see a company which continues to do business in Russia, we need to boycott their products and services. We as consumers, as investors, as shareholders need to say that that is not what we expected.

Ivanna Klympush-Tsintsadze: “Russia, the way it is, needs to be destroyed. Not necessarily physically, but economically”

Ivanna Klympush-Tsintsadze is a Chair of the Parliamentary Committee on Ukraine’s Integration into the European Union. She was the Deputy Prime Minister of Ukraine for European and Euro-Atlantic Integration (2016 — 2019). Ivanna says that it’s important to understand that Putin and Russia have announced the war not exclusively to Ukraine. This war is against the common West and those values we are defending.

Also she stressed that whatever Russian territory is called — either Tsarist Russia, or USSR, or Russian Federation — it always produces despotism, dictatorship, and is always trying to fight and conquer in the wars.

— We have to understand that the policy of appeasement, the policy of making more trade with the Russian Federation after the end of the cold war, believing that this more trade will change the Russian Federation, was a serious mistake. And now it is important to understand that Carthago needs to be destroyed. Russia, the way it is, needs to be destroyed. Not necessarily physically, but economically. In particular, that “gas station” has to be left without resources in order not to try to repeat the war again. Not necessarily against Ukraine, but against other countries of Central Europe, Central Asia and so on.

Andrey Stavnitser is owner and CEO of the TIS Group of terminals and Aspen Institute Kyiv Supervisory Board member. On the 2nd day of war he started doing logistics and opened a humanitarian Center in Helm (Poland). Then in Lublin and Romania. Andrey raised the problem of the pause palsy of most humanitarian aid which comes to Ukraine.

— After the 6-8 weeks of war, a lot of the humanitarian aid was coming from physical people, individuals and corporations from all over the world. They have done up to 4 shipments maybe and then obviously their resources were exhausted. And large multinational humanitarian organizations should be stepping in at this time, but they did not  because they are super bureaucratic. These organizations should stop talking and finally start acting and providing aid where it is needed.

Also Andrey said that the business which helps in rebuilding Ukraine, in some sense is also a social business.

Volodymyr Yermolenko: “We always face the coming back of evil, and the problem is that in Eastern Europe this evil was never condemned”

Volodymyr Yermolenko is a Ukrainian phiposopher, journalist and publicist. Also he is a Director of analytics of Interviews Ukraine. Volodymyr is convinced, that among other values which Ukraine can bring to the world, is highly decentralized spirit of its society:

— Why Ukrainians are so effective in this volunteering horizontal movement? Because it is inscribed into our political tradition. This political culture was overlocked over the past centuries. It was erased by Russian imperial narratives, and if you look at the 19th century discourse, you can see that the concept of Eastern Europe was equalized with the concept of the Russian Empire. Ukrainians show that another Eastern Europe is possible. This is a Europe of communities. And this leads us to a more important question about who is more efficient in this 21th’s century global economy. Is it a big multinational bureaucratic structure or is it something that has a bottom-up culture of communication of horizontal types?

Volodymyr underlined that unlike other European empires, which were crushed in the 20th century, the Russian Empire still exists. It has not been condemned for its mistakes. That’s why the global community should strive against Putin and his last empire in Europe:

— We often raise a question: how is it all possible in the 21th century? My answer is that we always face the coming back of evil, and the problem is that in Eastern Europe this evil was never condemned. When we try to describe today’s Russia we talk about faschism, neo-nacizm etc. But we need to understand that this culture of violence which is known in today’s Russia is coming back centuries and centuries deep in history. We don’t understand Putin without Stalin, Stalin without the Russian Empire, the Russian Empire of the 19th century without Peter the Great etc.

Volodymyr highlighted that the Russian Empire dominates both through colonization and assimilation. Therefore the Russian key narrative is that Ukrainians don’t exist.We are grateful to Aspen Institute Central Europe for their support and the opportunity to have dialogue with their Community.

Aspen Institute Germany: the seventh #UkrainianDialogue on how to move forward