The seventh #UkrainianDialogue in collaboration with Aspen Institute Germany: how to move forward 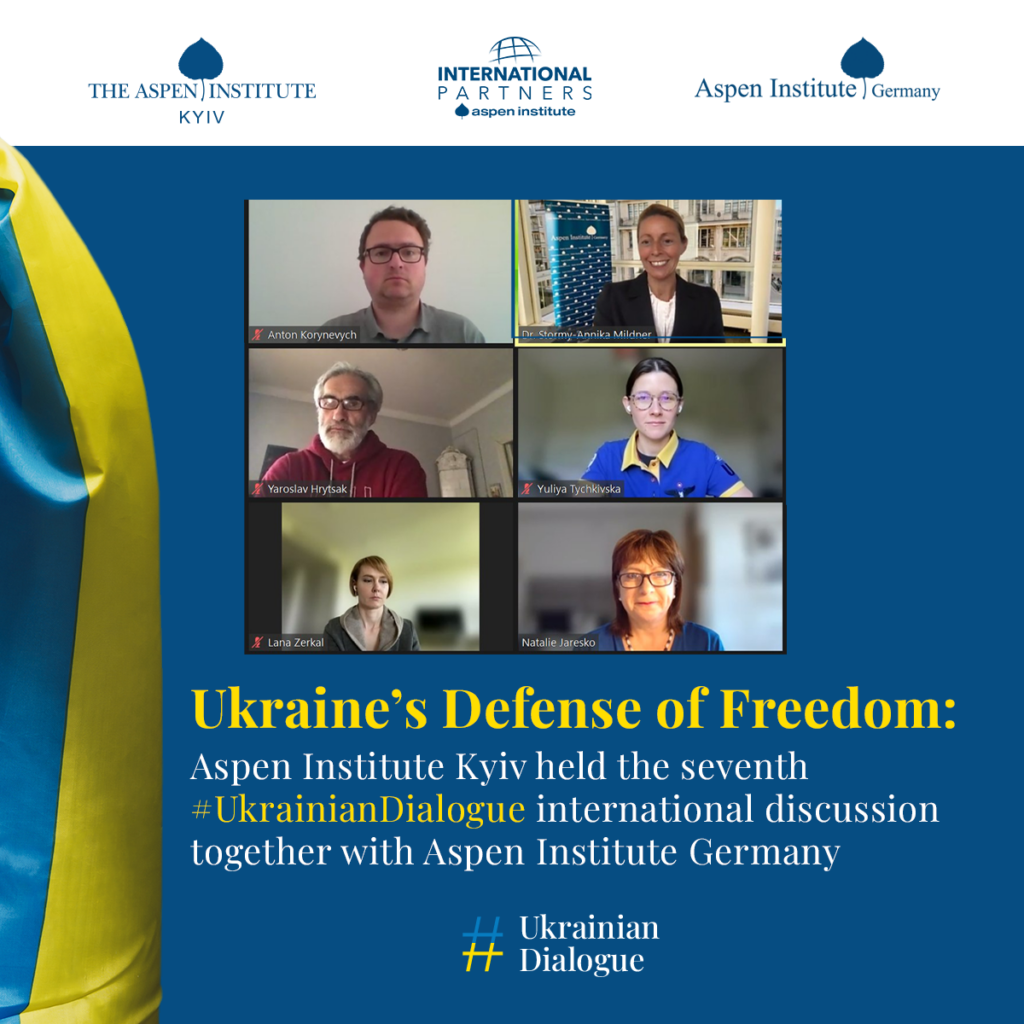 Natalie Jaresko: “The cost of the damage is one estimate, the cost of rebuilding Ukraine is quite different”

Natalie Jaresko is the Aspen Institute Kyiv Chairperson and a former Minister of Finance of Ukraine (2014 — 2016). Natalie says that Ukraine’s victory will combine a few things. First and foremost is Ukrainian military success. The second is revitalization, and the rebuilding of our country and the establishment of Ukraine as a major European nation. In order to facilitate this, Ukraine must obtain EU membership. Ukraine needs to join the European community both as a matter of setting history straight, and as a way of bolstering the Ukrainian economy.

Natalie mentions that at the moment it is not possible to estimate the actual amount of damage inflicted on Ukraine. Russia continues to bomb and destroy Ukraine. Based on an international report conducted by the CEBR, capital damage inflicted on Ukraine between 2014 and 2020 in Donbas and Crimea was estimated to cost about 120 billion dollars. This period of war also – a ground war, without bombing, conducted on 7% of Ukraine’s territory. If we extrapolate this assessment of the cost of damages to the current state of war, the current cost will be close to a trillion dollars. She added that the word “Marshall plan” doesn’t really apply in this case.

— In the most strict sense the Marshall plan [after WWII] in current dollars was 115 billion. Nowhere near the amount that is going to be needed now. In addition the Marshall plan didn’t really rebuild. And most of us are talking about rebuilding, renewing, revitalizing. The Marshall plan was really about putting dollars into the European economy and creating the economic platform for unification of Europe.

Natalie is sure that no one in Ukraine will want to rebuild a version of Soviet Ukraine. Ukrainians want to be able to rebuild Ukraine as a green, and energy efficient economy, and also rebuild it as a country for people using the best technologies, architecture, and vision of community that exists in the world.

— The cost of the damage is one estimate, the cost of renewing is quite different. The plan, the vision of what to rebuild needs to be owned by the people of Ukraine and the Ukrainian government but there is no way the Western world is going to support this plan without confidence in transparency and anticorruption. As much as we think about the vision, which needs to be owned by Ukraine there has to be coordination with the international community that is going to provide the money.

Yaroslav Hrytsak: The basic strategy should be “leaving the past behind and starting a chapter in history”

Yaroslav Hrytsak is a historian, a  professor of the Ukrainian Catholic University, and an Aspen Institute Kyiv Supervisory Board member. Yaroslav is convinced that it is important to start thinking about the conditions of Ukrainian victory. He stressed that one of the first victims of the war is historical truth.

— Because Russia is thinking of history in the past. Putin thinks like a 19-century imperialist. But the main difference between Russia and Ukraine is in the political traditions. This kind of civil organization, civil institution, civic resilience and many other things in Ukraine are very much embedded in the history. This is because we have a different history.

Yaroslav also is a member of the German-Ukrainian historical commission, and the basic history strategy should be “leaving the past behind and starting a new chapter in history”.

— I’m staying in Lviv, this is the city where my University is located. Lviv is in the most Western part of Ukraine. It is a former Polish and Austro-Hungarian city. And this history  has given it a special cultural diversity: Jewish, Armenian, German etc. It is like an ark. It is possible to compare Lviv to Sarajevo: a сity, which has a very similar story, diversity, and, unfortunately, a lot of conflicts. Especially the Polish-Ukrainian conflict, which I can compare to the French-German conflict or the Polish-German conflict. But we reconciled, and you can clearly see the level of support that Poland provides now. This would hardly be plausible 30-40 years ago. This is an example of what we are trying to do: we want to overcome history. Pretty much like the Germans did.

Lana Zerkal: “This war happened due to the fact that Putin was more than sure in his ultimate indulgence“

Lana Zerkal is a Former Deputy Minister of Foreign Affairs of Ukraine for European Integration. Lana stressed that Russia uses gas as a weapon. Consequences of these policies can now be seen in Poland and Bulgaria. Russia decided to interrupt gas supplies and not to continue contracts it had with these countries. This is a type of blackmail they use continuously.

— We hope that the first step of new energetic sanctions against Russia would be made with the sanctions on oil trade. Even here we see that 2 countries, Hungary and Slovakia, want to impose special conditions. It ruins European unity and creates opportunity for others to request special conditions and gives Russia the possibility to manipulate and to offer additional privileges to some countries, some companies and thus continue to blackmail Europe and the world with their policies and desires. The losses the world can get with the continuation of the war are much higher than any possible losses the economy can have now if sanctions can’t be introduced simultaneously in all countries.

Lana Zerkal is an experienced negotiator and participated in negotiations with Russia in the trilateral format. Especially in 2014, when the Russians opposed Ukraine’s agreement with the European Union and didn’t want it to be signed. Lana says that 18 rounds were conducted without any hope of success only due to the fact that a lot of European politicians thought that it would be useful to please Russians and to continue to deal with them despite the war.

—  All these intentions to please Russians, not to disturb or irritate them, led to this war. This war happened due to the fact that Putin was more than sure in his ultimate indulgence. This was caused by European policy. It is important to understand differences in mentality. Russians don’t think the same way European society thinks because they don’t believe in rule by the majority. They don’t believe in values. They have absolutely different approaches to values. They have a totally different culture and history.

Anton Korynevych was the Permanent Representative of the President of Ukraine in the Autonomous Republic of Crimea from 2019 to April, 2022. He highlighted that this war started in February 2014 with the occupation of Crimea, and it must end with the de-occupation of Crimea and the integration of the peninsula to the Ukrainian legal order.

— Before the 24th of February it looked like some countries decided to act like “let’s forget about Crimea, the main thing that Russia will not go further|. But it was the wrong strategy. As we saw, one of the biggest waves of attacks came from Crimea in order to seize control over Southern Ukraine. So, if some parts of Ukraine remain under Russian control, this whole tragedy of 24th of February will repeat again and again.

Anton highlighted that before February 24th Russia was seriously concerned with Ukraine’s active engagement with Crimea since 2019. Among the main achievements include the adoption on the Degree of the President, the strategy of deoccupation and reintegration of Crimea, the adoption of law about indigenous people, which is primarily for the Crimean Tatars, and the establishment of the International Crimea Platform in August 2021.

Also, Anton said that in future the International Crimea Platform could be seen as a kind of communication platform in order to understand how Ukraine can move forward and how we can fight the Russian aggression against Ukraine.

We are grateful to the Aspen Institute Germany for their support and the opportunity to engage in dialogue with the Aspen German community.

The eighth #UkrainianDialogue with our partner Aspen Institute Central Europe: how to defeat the last empire