Natalie Jaresko at the Aspen — GMF Bucharest Forum: “The question on what will happen in Russia must be something secondary when compared to bringing it to military defeat first” 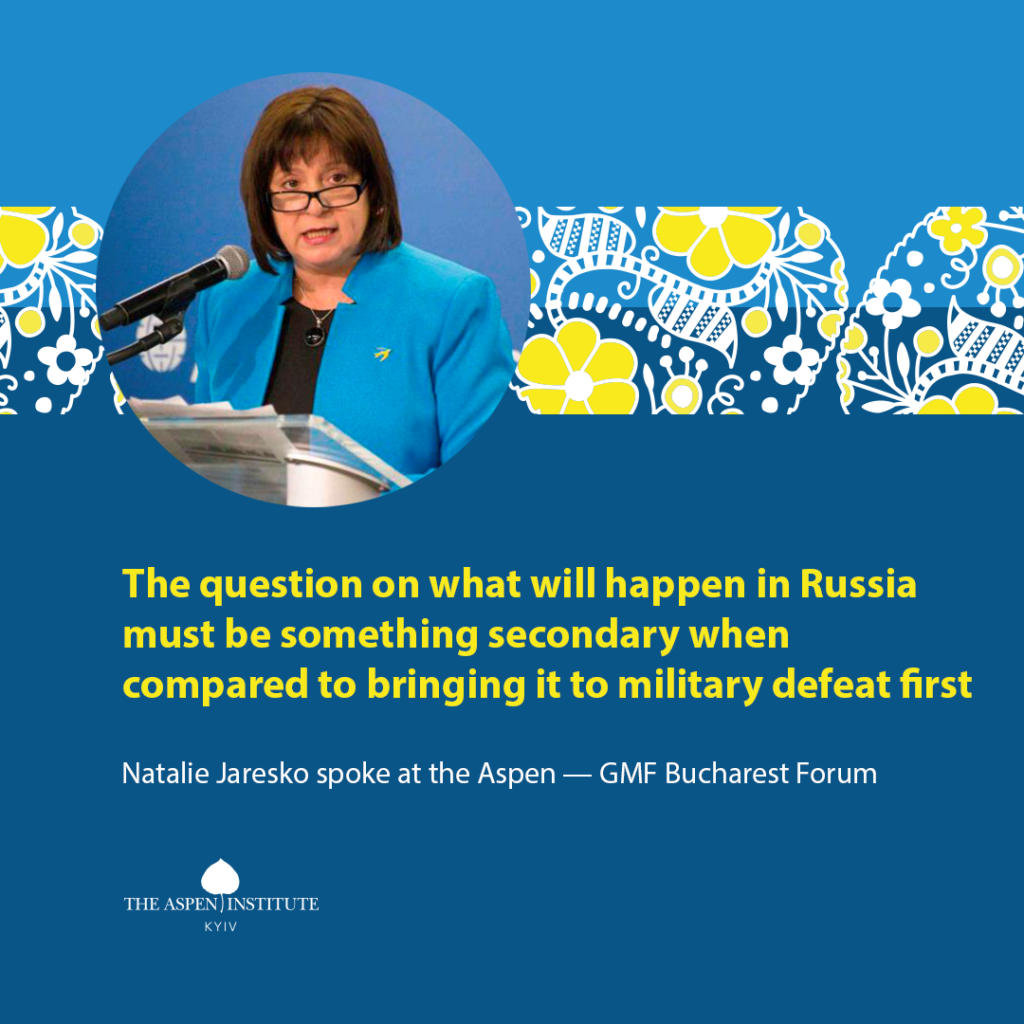 During the panel discussion at the Aspen – GMF Bucharest Forum, Natalie Jaresko, Chairperson of the Aspen Institute Kyiv Supervisory Board and Minister of Finance of Ukraine (2014 — 2016) underlined the sole solution to achieving peace is to defeat the Russian military as well as the importance of supporting Ukraine.

The Annual Aspen — GMF Bucharest Forum was held in Romania on November 29 — 30. Forum is a platform for discussions, which seeks to address topical questions and tackle the complex issues of increasingly dynamic and volatile regional and international contexts. The event was organized by Aspen Institute Romania and the German Marshall Fund. Aspen Institute Kyiv joined the event as an institutional partner.

Speaking on the future perspective of global peace, Natalie reminded the international audience ten principles that President Zelenskyy described at the G20 meeting. Among them were nuclear safety, food security, energy security, release of prisoners and deportees, re-establishing of Ukrainian borders, withdrawal of Russian troops, justice, environment protection, prevention of future escalation, confirmation of the end of the war.

— Peace requires military defeat. Otherwise there is no peace. A ceasefire is not peace. We had a ceasefire for eight years but it led to further invasion. No documents can be signed, no agreements can be reached until there is no sign to meet these principles. This is because there is no trust and can be no trust with Russia which illegally and in an unprovoked way invaded a sovereign nation and used over 16 thousand missiles against primary civilian infrastructure.

Any peace agreement will not work so long as any part of Ukrainian land is under Russian occupation. Russians, wherever they come, demolish every Ukrainian city. During the occupation, Russians tortured and killed Ukrainian civilians.They continue to do so. Also, over 2 million Ukrainians were illegally deported to Russia from their houses, among them were over 200 thousand children who have been stolen from us.

— Remember that in every town that has been liberated, we all saw the tremendous evil and destruction, as well as torture that goes on behind the wall of occupation. This is an attempt to completely destroy a society, commit genocide and eliminate Ukrainians.

— Europeans can’t give up on  supporting Ukraine. They can’t afford to watch a  European nation being destroyed. We have seen this before in history, and we reacted too late. Now,  we need to do everything we can to support the military defeat of Russia in order to obtain  peace. Many Ukrainians are contributing to the defense of peace and freedom of Europe to a large extent: whether they are on the frontline of war or they are freezing in their apartments with no running water.

Natalie underlined that support for Ukraine right now means more weapons, air defense, support in maintaining critical government services and help with the  restoration of power throughout the country.

Natalie was in the USA administration when the Soviet Union was collapsing. She said that the George Bush Senior Administration at that time was also terribly concerned about the Soviet Union’s collapse and  what would happen to their nuclear weapons. However,  the world overcame it:

— I think practically what happens with Russia will to a large extent depend on how we as democratic countries come to support and strengthen Ukraine, strengthen the region and NATO, which will then define whether or not Russia continues to be an imperialistic and militaristic state.

Aspen Institute Kyiv Supervisory Board Chairperson urged everyone who supports Ukraine not to base their attempts on what will happen in Russia. It has to be something secondary to military defeat,  which comes first .

— We need to right now focus on the number of people that are dying and the way these people are dying: Russians targeting civilian  infrastructure and civilians. It is something that we need to implement as democracies not just for Ukraine but for the future of democracy on a global scale.