The war changed our usual view of the world. We have seen the incredible consolidation of our society, but shortly, we will have to rethink all aspects of interaction. The question of a new social contract became crucial. How to avoid further wars? How to preserve unity after the victory? What Ukraine’s future should be?

On May 31, the Aspen Institute Kyiv held an online discussion “On the Social Contract” for the Community. It was the first event of a project to address aspects of this phenomenon.

Among the main theses:

What is the significance of the discussion on the social contract for us?

It is a matter of time. After the victory, Ukrainians have to decide how Ukraine and Ukrainian society will develop further.

How did the idea of ​​a social contract develop?

The main problem in the world’s history was how to limit violence, the war of “everyone against everyone”. The first attempt was customary law, which regulated violence. In the ancient world, citizens had certain political rights and responsibilities. That concept was supplanted later by the idea of ​​the king’s priesthood. But it returned to the period of the revolution when the possibility of monarch execution became real. In addition, in Poland, there was a dignity principle called “Nothing for us without us”, which was also inherent in the Cossack culture of government and manifested itself during the elections of senior officials. In the last 60-70 years, a new middle class has emerged in the West. Those people had higher education, worked in the service economy and were young. It required not only prosperity and security but also dignity. Such a vision is also inherent in Ukrainian society.

If we talk about the Ukrainian tradition – is there an idea of ​​a social contract?

The idea of ​​a social contract implies that power does not come from above but from below. All entities have both rights and responsibilities. This idea is very much woven into the Ukrainian social tradition, as it appears in the Pereyaslav articles and later in the constitution of Pylyp Orlyk. A particular manifestation of this tradition is Mazepa’s revolt, which implemented the principle that “if the monarch does not perform his functions to the vassal, the vassal has the right to revolt”. From the view of European tradition, it was the realization of law. For Russia’s autocracy, it was a betrayal.

What is the key to creating and implementing a social contract for modern Ukraine?

In 1991, we gained independence but did not form a social contract. The social contract implementation required a critical mass of civil society, which did not exist yet. It would appear only in 2014, during the Revolution of Dignity. Immediately after the two Maidans, there were some consolidations and social consent, but right after the Revolutions, they were erased again. Today, for the first time, our civil society has felt its strength and responsibility, which could guarantee continued compliance with the terms of the agreement.

The speakers of the discussion were: 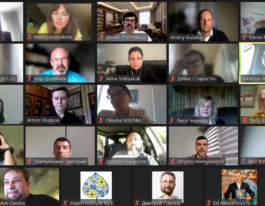 Aspen Institute Kyiv Supervisory Board meeting in Davos: How the Institute fights for freedom