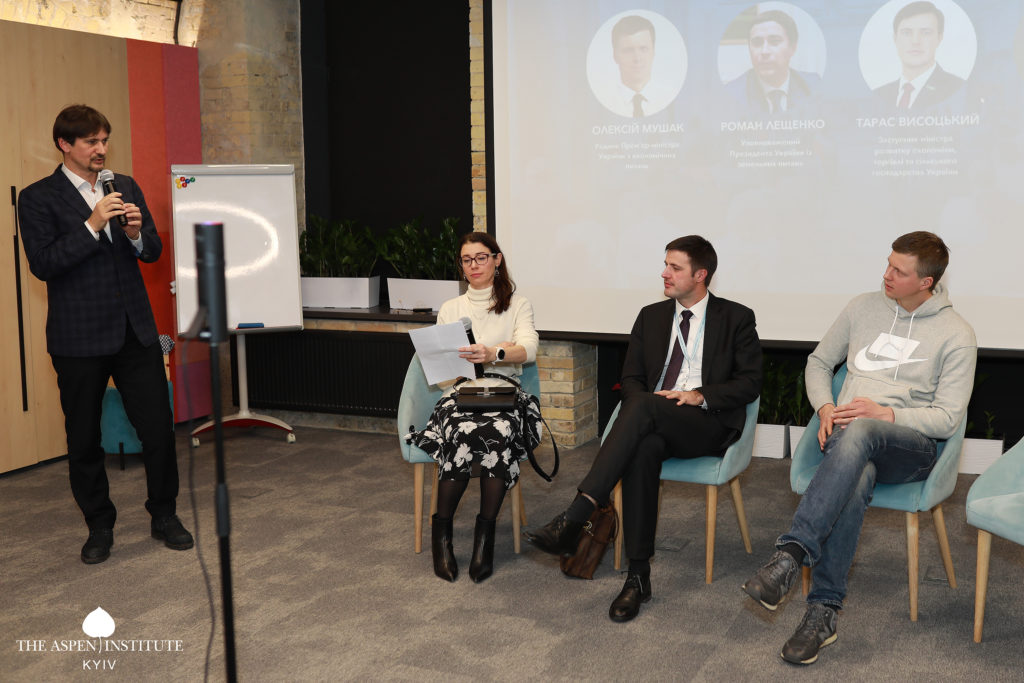 On February 11,  the Aspen Institute Kyiv held a moderated talk on the implementation of land reform.

How land reform will develop: what safeguards are provided to avoid monopolizing the land market; how balanced is the proposed model in terms of interests of unit-holders, farmers and local communities; what powers the united territorial communities will receive and what impact the reform will have on local economic development.

The invited speakers discussed the stages of land market introduction, potential opportunities for attracting international investment in the agricultural sector and the risks associated with reform.

Oleksiy Mushak, the Advisor to the Prime Minister of Ukraine for Economic Affairs, stressed that solving the land issue could reformat the genetic code and the course of the country’s further history. Ukrainian farmers now do not build long-term business development strategies, because they do not own the land on which they work. Land reform will facilitate the restructuring of the entire agricultural structure, shifting from an extensive, grain-growing approach that does not require significant resource inflows and generates rapid income to an intensive long-term approach (organic farming, horticulture, the introduction of new technologies, etc.).

Roman Leshchenko, Plenipotentiary of the President of Ukraine on Land Issues, stressed that the land reform will be adopted this year, and today’s land market law is well-balanced, conservative and provides for mechanisms to protect all stakeholders. The opening of the land market will also contribute to the de-shadowing of the capital and therefore of the economy as a whole.

Taras Vysotsky, Deputy of the Minister of Development of Economy, Trade and Agriculture of Ukraine raised the topic of paternalism in Ukrainian society, which is a significant risk for the united territorial communities not only in the context of opening up the land market, but also in the context of decentralization and transfer of significant powers to the local level.

Therefore, the issue of land reform is much broader and in fact opens the way for Ukrainian society to reformat and move from post-Soviet paternalism to free enterprise and a willingness to bear personal responsibility for change.

For a live broadcast of the conversation, see the link >>

The conversation was conducted within the Good Governance Program.

The Good Governance Program is supported by a grant from Luminate.

Dialogue with stakeholders: «The Impact of Decentralization Reform on the Local Economic Development»